Tell Me, Really: Why Is SEO Important — and Was It Always? 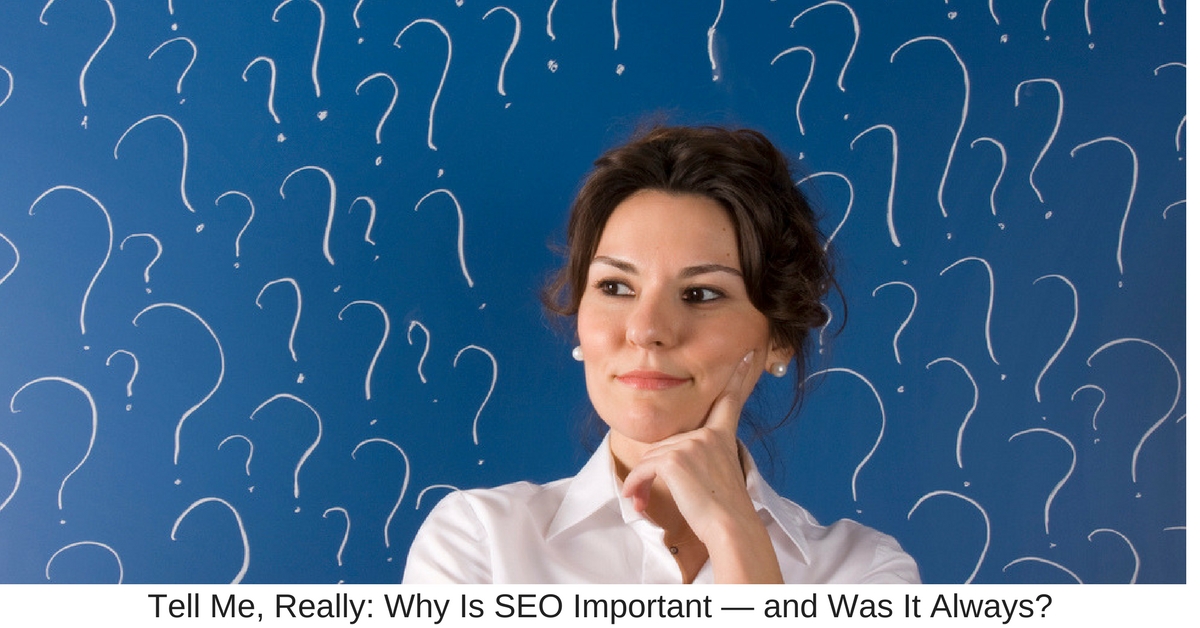 Have you ever wondered, “why is SEO important?” Sure, you’ve heard about it. I’ve been writing about it for the several months because it’s so important. But, is it important to you and your business?

I’m not going to lie. SEO is not my native marketing tongue. When it comes to writing, just about anything, I have a high level of fluency. Local marketing and public relations are right up my alley. I’ve had the blessing in all of my past professional lives to work with and for companies that met a very specific niche and were continuously ranked at the top of search engine results pages. Even when they saw the great Internet results, though, co-workers still asked me, “Why is SEO important” – especially if their Internet proficiency was birthed near the birth of the actual Internet.

To find out why, it’s important to look back at the beginning of search engine optimization, and to do that, we need to go back even further. 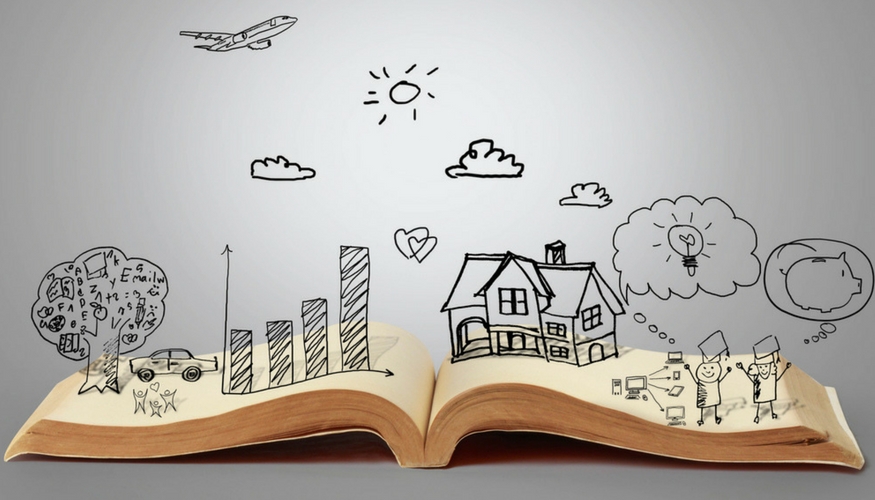 In the beginning of the SEO saga was the World Wide Web. In the 1960s, the US Department of Defense began awarding contracts that would create packet network systems. From those, ARPANET was born. It allowed messages to be sent to other networks; as it progressed, computer scientists, engineers, and others began projects that would allow more than one network to join an entire network comprised of single networks.

In the 1980s, the World Wide Web was launched, with the Internet’s first Web site and the WorldWideWeb browser— now, it’s Nexus — and by the mid-1990s, restrictions on commercial Internet traffic were lifted, opening the doors to a new future that has reshaped the future. We got Netscape, Firefox, Internet Explorer, and the most recognized, Google.

Not long after the launch of the first Web site, individuals, businesses, and organizations began putting up their own Web sites. Do you remember them? Often a solid background, little to no graphics, and brief text. Sites were scant and practical, with bare-bones layout and content.

Internet users were better able to find what they needed. Soon, though, the increase in Web sites and information became overwhelming. People found that they needed some way to keep track of the information being published and shared, and, much like a library catalogs and stores information, decided to do the same. Excite began crawling the Web to store this information. Yahoo! followed, with its unique take on creating its own directory system — the company used humans to document the information, placing a higher priority on the human-powered results than on those obtained by crawers.

Until 2002, Yahoo! used humans to give Web users the information they were looking for based on how humans ranked the sites. The founders, Stanford University graduate students, made their Web site directory hierarchical, placing the search engine’s directory front and center for anyone visiting the Web. They gave relevant results, looked for quality information that would help the users, and truly met the needs of Internet users.

The World Wide Web kept growing, with people creating sites for any and every thought and whim possible. Yahoo, much as it tried, kept building its directory, classified by humans for humans. Forbes, though, in an article that shows why Google has outlasted Yahoo and dominated the Web, raises an interesting point.

That spirit, they note, was about more than creating a catalog that just let you find great Web sites if you knew the content you were looking to find. Yahoo had a great organizational system that put all of the information online into neat, predetermined categories. Just look in that category, and you’ll find the most relevant Web sites.

Unfortunately, it did little to break someone out of that category. Berners-Lee envisioned a network that would allow a user to not just find the information they want, but to also see pieces they might not have anticipated through a network that found connections and relationships between seemingly different topics. He wanted users to be able to find the pieces that logically followed the way a human thinks.

So, early on, search engine optimization had nowhere near the emphasis it does today. The Web site was so small, people often found their own connections, and sites weren’t vying for top spots in the directories. As the Internet grew, though, and users moved from directory-based searches to cross-referencing-based searches, Google and other search engines began to become the first spot users landed when they needed information on the Internet.

And, as that happened, search engine optimization began to take a higher priority — but early on we entered a dark phase that made people not only ask, “Why is SEO important?,” but also, “How did SEO get to this point?” 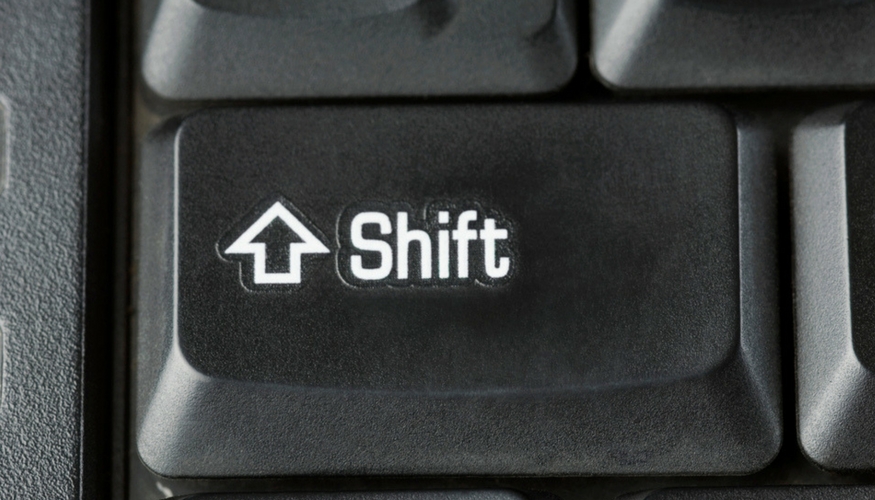 In 1994, people began to realize that the Internet could be used for more than just personal use. They found that creating Web sites that attracted people could help them sell more of their belongings. They looked for ways to make their early, rudimentary sites filled with the information and content that would make someone want to purchase their goods. From protective equipment to Web site design software, people began looking for ways to get their sites seen.

Enter John Audette, who, in 1995, formed an Oregon company designed to help companies with their multi-media projects and, later, their online marketing. Audette coined the phrase “search engine optimization,” a process used to optimize a Web site that would help it rank higher and get more traffic. Internet users quickly found the answer to the why-is-SEO-important question: the more efficient and effective your search engine optimization, the higher chance you have of reaching and engaging more interested, prospective customers.

While this was happening, Google was looking for ways to get its own users the information they wanted. Founders Larry Page and Sergey Brin conducted research at Stanford University on search engines, based on the concept of link popularity. Their site, Google, using its PageRank algorithm, was launched in 1998; the formula is still incorporated into search tools and updates.

The algorithm pulls in different variables, including the probability of someone clicking on a Web page, the probable spot at which a user will stop clicking, and the number of citations (backlinks). Each time it crawls the Internet and records the new content and markers in its index, it gives a page a new PageRank. If, for example, this was the only article talking about the history and importance of search engine optimization, it would be ranked first. Once additional articles are published, though, the PageRank for this page would decrease to include all of the relevant pages.

Until recently, users could see the PageRank of Web pages, ranked between 0 and 10, with 10 being the most popular of the site. While the displayed number didn’t factor in everything
that went into determining the PageRank, it was a good rough estimate of the page’s value.

Learning all of this information led to a low spot in SEO’s short history. Professionals claiming to be SEO experts found ways to cheat the system and play to Google’s variables without actually meeting the needs of users. These practices are now called black hat SEO, and include a variety of actions that violate the search engine’s terms to gain a higher ranking on the search engine results page.

For example, keyword stuffing became a fast way to get to the top. Keywords are vitally important in SEO, as they are the words that users search when they want to find information. Say I’m looking for cheap fidget spinners in Ohio (yes, I know I wrote about this a few weeks ago. We are still a fidget-spinner obsessed household.) A business selling cheap fidget spinners in Ohio would want to center the content on their Web page around that specific search team. Using it a few times would likely lead to a higher ranking.

Unfortunately, companies and content creators began filling their Web pages with these keywords. Nothing was relevant or helpful; in most cases it was irritating finding a Web page filled with the same few words and not much else.

This was just one of the many problems that began to arise. Sure, there were — and still are — others.

Since then, Google has made multiple updates to the algorithms that have made SEO a highly valuable component of a marketer’s plan to increase brand awareness and visibility, engage Web site visitors, and, ideally channel them down the sales funnel to become faithful repeat customers.

Today: Why is SEO Important to You? 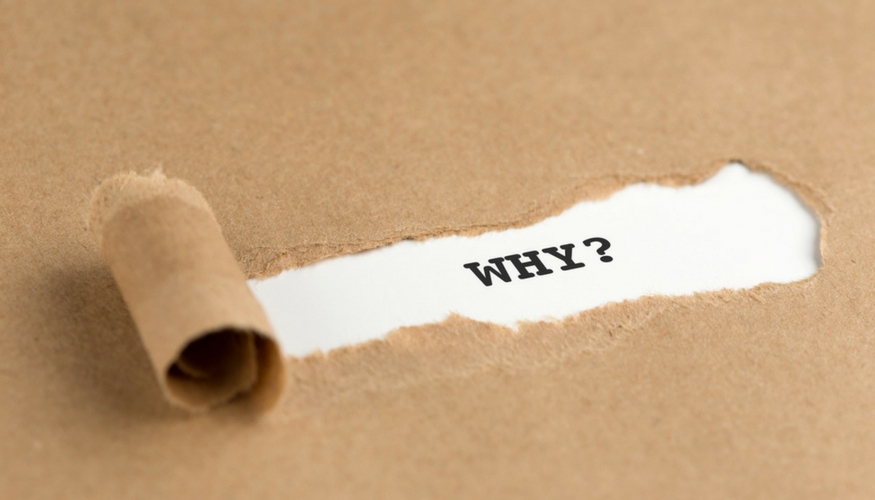 Think about all of the components that can make up a Web site. Forms, graphics and other non-text content, confusing site architecture, duplicate pages, spelling and language barriers, inconsistencies, and incongruencies — all of these can cause confusion when your site is being crawled. The bots aren’t sure what to enter into the index, who you are trying to reach, and what you want the followers to do. As a result, the probability of visitors arriving at your site drops.

Search engine optimization is a practice that takes a look at each of these areas, along with many others. It guarantees that your on-page, off-page, and technical specifications meet and exceed the requirements of both Google and your users to get your Web site to the top of the search engine results page.

With Internet homepages often being home-away-from-home for most people around the world, doesn’t it make sense to make yours welcoming, comfortable, and hospitable? You’re inviting people to your home — SEO makes sure they can find it, know their way around, and, most importantly, want to visit again. Perhaps it’s time for a re-design of your Web site by inviting an SEO expert to give you a free audit.

If today’s the day you can safely answer the question, “Why is SEO important?” it should also be the day you take steps to make it a priority. Give us a call today. For a limited time, we’re offering a free SEO analysis. We’ll take a look at the online home you’re offering visitors, and help you spruce it up so that they not only want to come, but they also want to stay.

I’d love to hear, too, why SEO is important to you. What could a solid search engine optimization plan do for your business? Share in the comments below!

Oops! We could not locate your form.